On September 1, 2013, Wayne M. from Alhambra, California, won the $393,661 California Fantasy 5 jackpot. I was delighted to welcome Wayne as the 107th member of the exclusive Club of Gail Howard Lotto Jackpot Winners. He used Balanced Wheel 53222 from my book, Lotto Wheel Five to Win.

Wayne sent me copy of his winning ticket and official claim form along with this letter:


"It was a real pleasure and honor to speak with you. I will tell you my story about winning the jackpot here in California last September 1, 2013 using your wheeling system. First of all, let me give you a brief history. Somewhere back around 1995 I started using your pick-5 wheeling system for the Fantasy 5 game here. That earlier book, Lotto Wheel Five to Win, as I recall had about seventy systems. In a span of about six weeks I hit 4/5 numbers three times. With so many hits within such a short period of time I was convinced that I was on to something good. That year I went on to hit 4/5 numbers 5 times. Around 2009 I found your updated version of Lotto Wheel Five To Win and immediately bought it. Since then I've probably hit 4/5 numbers about 15 times with the help of your book. So, I figure I've hit around 20 times over the years for 4/5 numbers.

"On September 1, 2013 I used your Balanced Wheel 53222 (22 numbers in 22 games for a 3 of 5 Win). I of course played all 40 games. It was on a Sunday. After attending a pre-Labor Day party that day I went home that evening and immediately checked my numbers. There were 8 tickets to check (five games on each ticket). I started seeing three numbers on a couple of the tickets. Then on the next ticket one of the rows had all five numbers and I couldn't believe it. I went back to the computer and the Lottery website to see where the winning ticket was purchased. It was at the location where I bought the ticket. I knew I had the winning ticket. It had been a four day rollover and that being the fifth day I was the only winner. The amount was $393,627. I was so ecstatic and elated and wouldn't have won without your wheeling system. My picture and short write-up are still on the California Lottery website.

"As far as number selection I mainly used a lot of the numbers I normally use but threw in some numbers I don't play as often. I had noticed that the previous week the number 23 had several "hits" so I knew it was a hot number and I included it. It's a good thing I did as it came up again.

"One of the keys to all of this is that I've never given up on your system even when I'm not winning. Your phrase 'you must have a wheel to win' has become a part of my philosophy.

"I will always be grateful for your Pick-5 wheeling systems and I know that at some point in time I will hit another jackpot.

"What will I do with the money I won? I am 62 years old and will probably retire in a few years so the money will sure come in handy after I'm retired. I might go back to a quieter life back in the Midwest where I grew up but will always have your books and software wherever I go to help me keep on winning.

"You have my permission to use my name and story and I hope my winning with your systems will inspire others to discover the power of the wheel.

"Thank you so much.

Learn how to win this lotto game for free: 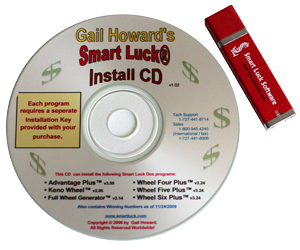